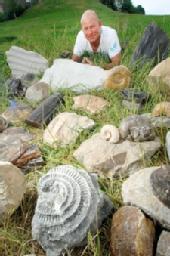 Steve England with some of his fossil finds

A man who has unearthed an incredible haul of fossils from the ground of a city park, claims his finds put the quality of those from the Jurassic Coast to shame.

He says the only place he has seen fossils of the same calibre is at the National History Museum in London.

Mr England grew up in the Lockleaze area of Bristol on the fringes of Stoke Park and has been fascinated by the area’s natural history since he was a child.

He now claims to have mapped Stoke Park’s history back millions of years, and says he believes the area was once a drowned desert.

To prove this, Steve, dubbed the Ray Mears of Bristol, has unearthed “ammonites the size of dustbin lids” as well as fossilised palm leaves.

He said: “It’s mind-blowing. The first place people think of when they think of fossils is Lyme Regis, but all they’ve got is marine fossils, we’re got marine and desert fossils right here in Bristol which are far better.

“I have several species of ammonites which were like massive sea snails, some of them are as big as dustbin lids. I have giant clams, hundreds of oyster shells, pebbles and even fossilised sea bed with the ripple marks in it — which is what you would see at the beach but this sea bed is 150 million years old.

He added: “I have found fossilised salt water lagoon bed with worm casts in it, and one piece I have has a shrimp still in the rock — the only place I have seen this is at the Natural History Museum in London and that came from Africa.”

Steve’s incredible finds, coupled with years of online and other research have led him to conclude that Stoke Park and the Bristol area was once a balmy tropical paradise.

He said: “Strange isn’t it, we all live in this area and have walked through Stoke Park and the Frome Valley for years not knowing what it is we are walking on or looking at.”

“I managed to obtain a copy of a soil report from the builders who are building houses in the nearby area, and in this report it dated the mud to the Jurassic age around 150-175 million years old, another report states that the Frome Valley dated back to the Triassic period around 250-300 million years old.”

He added: “One day I came across a rock with a fossilised palm tree stem in it, then another then another, it was all around me, so that gave me a massive moral boost to find out more.”

A year later Steve has collected a whole fossilised palm tree leaf, a collection of palm tree stems and pieces of the bark of the trees.

He said: “Excited was not the word, I just thought at last I have all the pieces to the geological jigsaw puzzle.”

Now Steve wants to use his findings to help educate local children.

He said: “What’s the point in them going off to Lyme Regis when they can come to Stoke Park and go home with better fossils than there? People just don’t realise what we have here on our doorsteps.”