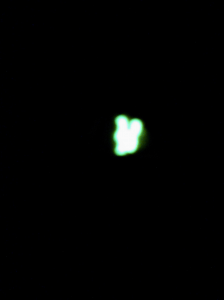 The light of the glow-worm in action

Whilst walking my dogs late last night I noticed little flashing lights in the grass, well it turned out to be Glow-Worms. Known worldwide as fireflies, belonging to the family Lampiridae, our British variety are called Lampyris noctiluca and are found all over Europe.These are actually beetles , and it is the adult females who flash; they use a mixture of chemicals in their bodies to make light. It’s called Bioluminescence. Some species of deep ocean hunters use this method to attract its prey too, but the glow-worms flash to attract a male. Notice in the photo of the beetle laid on its back, at the end of its thorax you can clearly see where the light is emitted.
A great way to find where they have colonised is to look for empty baby snail shells as this is their favorite food. It’s very useful to have a torch with you when doing this. 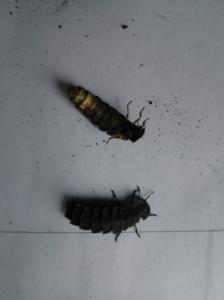